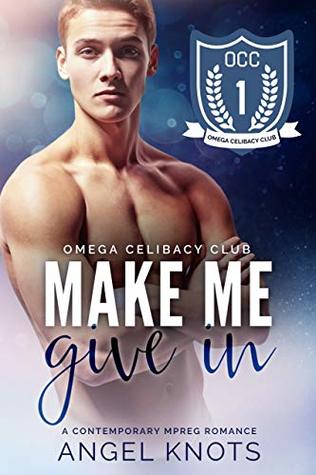 Make Me Give In

Welcome to the Omega Celibacy Club. No sex until graduation. No unexpected pregnancies. No alphas needed.

Not me and my roommates, though. Not if I have anything to say about it. Too many of our classmates here at Preston College have gotten knocked up and then dropped out. Given up their goals and dreams just because they’ve met an alpha with a big… ego. The point here is that there’s only one surefire way to avoid that trap, and that’s why I started the Omega Celibacy Club. No sex until graduation. No unexpected pregnancies. No alphas needed.

And no, I’m not just saying that because I’ve been hung up on one particular alpha for approximately ever. I’m totally over Hunter King. I mean, not that there was ever anything to getover. Our families have been friends forever and he dated my sister back when I was still just a kid, but even if me and my right hand may have pined for him once upon a time, I barely ever think of him anymore.

I mean never. I never think of him anymore.

Did I mention I’m over it?

HUNTER
Weddings are a great place to get laid, but when I show up for my ex’s big day, I’m hoping to get a lot more than that. I’ve never admitted it, but the reason I broke up with her all those years ago was because of her brother. One look at little Simon Lawson and I was a goner. Of course I didn’t say anything though, not back then. I didn’t touch him. Always kept my distance. I had to, because he was just a kid… but he’s all grown up now.

I’ve bided my time for years, but now I’m ready to see if the feeling is mutual. And if it is, I know exactly what I want. I want Simon. I want a family. And I want it forever. And even though I’ve never been the kind of alpha who imposes his will on omegas, when I finally realize just what it is that my omega needs, I know I’ll do anything at all to make that forever happen.

In fact, I’ll do everything.

MAKE ME GIVE IN is the first book in the Omega Celibacy Club series, a contemporary omegaverse world where the only thing stronger than an alpha’s will is his desire to keep his omega happy, and where even omegas who don’t believe in fated mates sometimes still find them.

Simon, along with his omega roommates find themselves forming a small group as a way of keeping themselves focused on their studies and future dreams. So many of their omega friends are dropping out of college because of falling pregnant, and either not having the support of an alpha or feeling they have to give up all their dreams and goals so their alpha can pursue his.

As the self-proclaimed leader of the little omega group Simon has decided they should form a celibacy club, dubbed the OCC by group brainiac and all around adorkable, Emmett. The club has decided to stay celibate and focused on school and their dreams of a future once they graduate.

This is the perfect plan, until hunky Hunter, the alpha crush of ALL Simon’s teen fantasies shows up during an unexpected SUPER-heat. **gasp😱 Oh No! Whatever will happen?!?!?!

Make Me Give In, was a lot of fun. A super sweet cast of characters that you love who were absolutely adorable. This story is one to read when you are looking for lighthearted endearing romance. 💕

There are no explosions, except in the bedroom, and no car chases (although Hunter does race by plane then car to get to Simon in one scene). No villains, mean girls, mad scientists, dragons, etc., BUT there are little brothers, pushy mothers, brainiac roommates who believe in the theory of fated mates ( “it is scientific fact” ~ Emmett), and buns in the oven. 😍

AND if you take away the Alpha/ Omegaverse theme, you have some Power-exchange happening. Rawr!!🔥HAWT!

“This is our happy beginning.” ~ Hunter

I received a free copy of this book via LesCourt and am voluntarily leaving a review. 💋