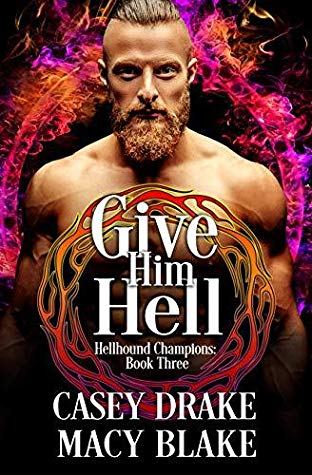 The Blurb: Nick Smith is a man with a mission: find the place where he’d been held captive as a child and discover what happened to the kids he left behind. His memories are in flux, returned to him after being blocked for the past fourteen years, along with his ability to shift into his lion form. Nick is ready for answers. Instead, he finds a huge Viking of a man with flaming eyes and more power than Nick knew existed.

As a hellhound, Jedrek is often sent on missions that lead to nothing. It’s part of the gig. He’s a champion of the fire goddess, tasked with keeping the secret of the supernatural world safe. When he gets called to a house of horrors he’d not visited in years, the last thing Jedrek expects to find is an out of control alpha lion who brings to life feelings he’s never felt before.

The mysteries of Nick’s past collide with a powerful, evil force causing havoc in the supernatural world. Nick is convinced he can determine who is behind the current rash of dark magic–especially if he has the strength of a hellhound at his side. And if that hellhound is one he can’t keep his mind or hands off? Well, that suits the lion instincts roaring back to life just fine.

I received a free copy of this book via LesCourt and am voluntarily leaving a review. 💋

Ohhh how I love this SERIES! 💕

“What? The only thing I want is a sunny spot and my… Jedrek. And lube. Jed, can we add lube to the grocery list or is that weird?” Jedrek coughed. “Well, it’s weird now.”

🎶in the jungle the mighty jungle the lion sleeps tonight…🎶
Ohhh how I love this SERIES! 💕 Can’t say enough good things about it.

If you are looking for some good paranormal MM ROMANCE fun then this along with Macy Blake’s, THE CHOSEN ONE SERIES will make your heart happy. I promise.

In this story we meet Nick, who has been searching for a long time for the house where he and a bunch of other shifter kids were being held against their will, while a witch and other beings manipulated their magic. Nick made a promise to find help and return, but because of circumstances beyond his control he wasn’t able to make good on that promise for many years.

After discovering the house where he was held prisoner, abandoned, Nick also discovers the presence of a very handsome shifter who could pass for a Viking named, Jedrek.

Jedrek has come to see who activated the wards on the abandoned house and is stunned to see the beautiful angry and frustrated male before him. After a confrontation the two work on their communication skills as only two hot male shifters can. 😻

After some ups and downs, and lots of shifter hotness, magical mayhem, an alpha lion finding himself and his pride, and being tasked with a big job by the earth goddess, the MCs and the rest of the crew, get their HFN, which is ok. Their is no cliffy, really… You just know the story will keep going because the Chosen One hasn’t finished his journey yet. 😉