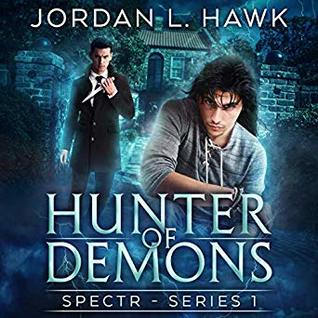 The Blurb: Unregistered paranormal Caleb Jansen only wants a normal life. But when a demon murders his brother, Caleb knows he has to avenge Ben’s death, no matter what the cost. Unfortunately, his only allies belong to an extremist group who would kill Caleb if they found out about his talent.

Gray is a wandering spirit, summoned to hunt and destroy demons by drinking their blood. This hunt goes horribly wrong, and for the first time in his existence Gray is trapped in a living, human body. Caleb’s body – and Caleb is still in it.

Hotshot federal agent John Starkweather thinks he’s seen it all. But when he’s called to exorcise Caleb, he finds a creature which isn’t supposed to exist outside of stories. For Gray is a drakul: a vampire. Having spent his life avoiding the government as an unregistered ‘mal, Caleb can’t let himself trust a federal exorcist, no matter how sexy. And he certainly isn’t going to give into the heat growing between them and sleep with Starkweather.

Can Starkweather win Caleb’s trust and convince him he isn’t the enemy? Can Caleb keep Gray under control, as the drakul experiences the temptation of a living body for the first time? Because if he fails and Gray gives in to bloodlust, Starkweather will have no choice but to kill them both.

I have owned the first SPECTR SERIES for ages, but when I came across it on Audible Escape, I felt it was time. So much happens in such a short amount of time that I have listened and read book 1 twice, and am even listening to it while I write this review.

Agent Starkweather (John) and Caleb get off to a rocky start. With an entity possessing Caleb’s brother’s dead body, then doing a body jump into his when a mission by zealots to rid the dead body of the entity is fubared.

Now Caleb finds he is alive, when he died, orrr almost died, or died and then was saved, or something. He is all confused, and scared and ticked off that now thanks to SPECTR not doing its job, his brother’s corpse was possessed, he has no clue what happened to his sister inlaw, he is packing around a demon/ not demon called Grey, and now he will be registered as a Mal with SPECTR. To make it all worse, Grey wants to sniff and hunt down another demon like some bloodhound and EAT IT!😱

This first book is so fast paced, you need to strap in and grab the ” OH SHIT!!! ” handle. The characters are great, and snarky in just the right way.

I am looking forward to the rest of the series.