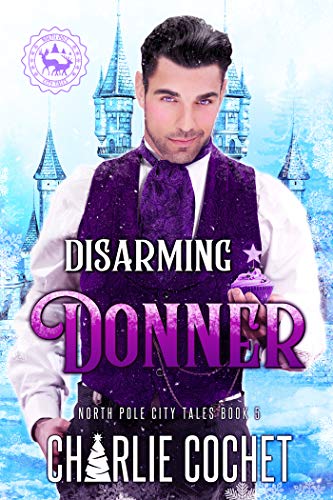 The Blurb: As a beloved Rein Dear and Christmas elf for Mayor Kringle, Donner prides himself on his flawless reputation, good sense, and wise decisions. Donner never does anything until he’s thought it through properly. He’s certainly not one to get flustered, infuriated, or fall prey to romantic nonsense. At least not until the most unlikely of elves begins chipping away at Donner’s defenses.

Calder is a Dockalfar—a dark elf. He’s wicked, untrustworthy, and armed with lethal magic. At least that’s what everyone thinks. It’s easy for them to believe the worst and mistrust him before they’ve even spoken to him, but Calder is out to prove that he’s more than his Dockalfar blood, especially to a certain Rein Dear who has caught his eye. But it will take more than sweet words for Donner to admit what’s in his heart

Dear Santa, All I want for Christmas is a Calder!✨🎅✨

This delightful enemies to lovers novie swept me off my feet! I fell and fell hard for the gentle giant of an elf, Calder. As a Dockalfar, Calder is the sworn enemy of the Christmas elves and residents of Winter Wonderland. Calder though, takes it all in stride because he is in North Pole City to help his little brother, Cupid, learn to harness his dark magic. Being in the company of Cupid’s Rein Dear Brother, Donner, for long periods of time is an added bonus. The more time the two spend together the more time Calder wants to spend, and the more Donner learns the sweet gentle side of Calder isn’t an act, but who he truly is inside.

I know I say it after each of these books but I sure do love this little series. It is the perfect adult holiday story filled with adventure, drama, comedy, and of course romance.

Now on to the final book, and the one I have been anticipating since, Vixen’s Valor.

I received a complimentary copy of this book in exchange for an honest review.⛄