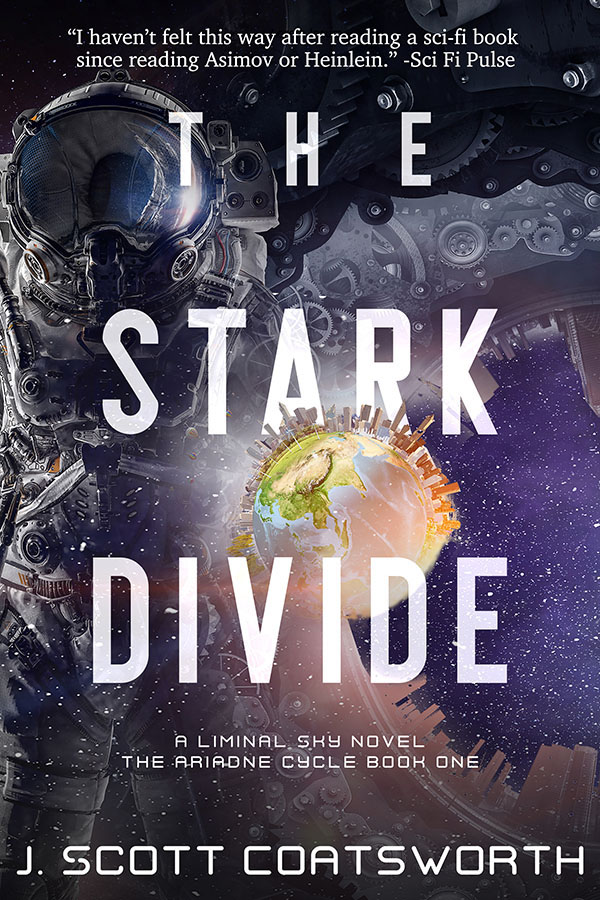 J. Scott Coatsworth has a new queer sci fi book out book one in the Ariadne Cycle: “The Stark Divide.” This is a re-release.

Some stories are epic.

The Earth is in a state of collapse, with wars breaking out over resources and an environment pushed to the edge by human greed.

Three living generation ships have been built with a combination of genetic mastery, artificial intelligence, technology, and raw materials harvested from the asteroid belt. This is the story of one of them—43 Ariadne, or Forever, as her inhabitants call her—a living world that carries the remaining hopes of humanity, and the three generations of scientists, engineers, and explorers working to colonize her.

From her humble beginnings as a seedling saved from disaster to the start of her journey across the void of space toward a new home for the human race, The Stark Divide tells the tales of the world, the people who made her, and the few who will become something altogether beyond human.

Humankind has just taken its first step toward the stars.

Is This Book Romance?: No

Is This Part of a Series?: Yes
Series Title: Liminal Sky: Ariadne Cycle Trilogy
Position (Number) in Series: 1
Necessary to Read Previous Books: No
Other Books in Series:
2 – The Rising Tide (rereleasing 8/10/20)
3 – The Shoreless Sea (rereleasing 9/10/20)

This is the second edition. The first edition was published by DSP Publications in 2017.

Get It On Amazon

Seedling: Part One of The Stark Divide

The captain finished his systems check and sat back to enjoy the view through the bridge’s viewport for a brief moment.

The small pinprick of light that was Earth shone brightly in a silent sea of stars. Somewhere near that little speck was the even smaller speck of Frontier, invisible from this distance—the biggest station circling the planet. Far larger than the Dressler and fully mechanical, it spun above the Earth’s surface. It was their return destination, once they finished this mission.

With luck, Trip would be on station as well. Colin missed him sorely. They saw far too little of each other, with their staggered schedules. Ship pilots were in constant demand. He closed his eyes and thought of the last time they’d been together. They’d made the most of the thirty-six hours on Frontier, but it wasn’t the sex he remembered best. It was the warmth of Trip’s chest against his back when they slept. Where are you now?
With a sigh, he deactivated the console. “Leaving the bridge,” he called to the Dressler, and she acknowledged him with a brief flashing of the wall lights.

He unbuckled himself from the pilot’s chair and pushed away toward the doorway. There was just enough time for a little rest before they approached Ariadne.

The exit irised open at his touch, and he floated out into the runway, ready for a quick shower and a catnap. He still had a lot to get accomplished before rendezvous.

He was almost to his cabin when the Dressler’s dulcet tones called to him over the ship speakers. “Captain, Engineer Hammond requests your presence in the hold.”

He cursed under his breath. So close.

Colin spun around and pushed himself across the runway, then opened the door that led down to the hold where the ship storage held their rations, tools, and all other things needed to keep the ship and themselves functional in the vacuum of space.

It was still strange coming in here after spending time in the somewhat cramped quarters in the rest of the ship—such a vast room, half the internal volume contained in two stories, room for when the Dressler needed to haul larger cargo.

He had entered at the floor level, where a metal grate was bolted down into the Dressler to provide a stable platform for the ship’s cargo. The space was dimly lit, and he didn’t immediately see Hammond. “Dressler, some light, please?”

One by one, luminescent patches of the Dressler’s internal skin lit up around the hold, arching from the floor to the ceiling and back down again like a golden rainbow. Hammond was suspended above, staring intently at something on the ceiling. “Captain, wanna come up and take a look at this?”
“What’s going on up there?” Colin peered up at the spot the engineer had indicated. All he needed was another complication.

“Not sure,” Hammond called back, a frown on his usually cheerful face. “I need your opinion.”

Colin took hold of one of the rails that ran up to the ceiling and hauled himself upward. As he pulled himself along, one of the rungs felt loose.
Damn AmSplor. He kept telling them they needed two engineers on these ships to keep up with necessary maintenance, but it was never in the budget. One of these days there’d be an incident and they’d be sorry. He just hoped it wasn’t on his watch.

Colin reached the apex and pulled himself across to where Hammond was working using metal handholds.

Hammond opened his palm. It was wet, covered with the golden ichor that made up the Dressler’s circulation system.

“What happened? Did you puncture something?” Not a big deal. It was an internal wall, and the Dressler would heal quickly enough, but he was annoyed to be called away from a shower and some rest for something so unimportant.

Colin looked. There was an abrasion on the skin of the ship. It looked like an open wound. Something biological, not accidental. He reached up to brush it with his fingers, and the part he touched ruptured, spewing ichor across his face.

Startled, he lost his grip and started to drift, but Hammond grabbed his suit and pulled him back up.

“Careful there,” Hammond said as Colin flushed with embarrassment.

“Thanks.” Colin wasn’t used to making such rookie mistakes. He must be tired. He wrapped his arm tightly around one of the handholds. “Ever seen anything like this before?”

Colin looked at it closely. The edges were a strange, sickly yellow, irregular, almost fuzzy. That can’t be good.

Mission-class ships didn’t get sick. They’d been bred with immunity to most kinds of known germs and infectious agents.

“I think we better get the doctor in here.”

Scott is giving away a $25 Amazon gift card with this tour, and a signed paperback trilogy of the Oberon Cycle (Skythane, Lander and Ithani) – two winners! Enter via Rafflecopter for a chance to win.

Scott lives with his husband Mark in a yellow bungalow in Sacramento. He was indoctrinated into fantasy and sci fi by his mother at the tender age of nine. He devoured her library, but as he grew up, he wondered where all the people like him were.

He decided that if there weren’t queer characters in his favorite genres, he would remake them to his own ends.