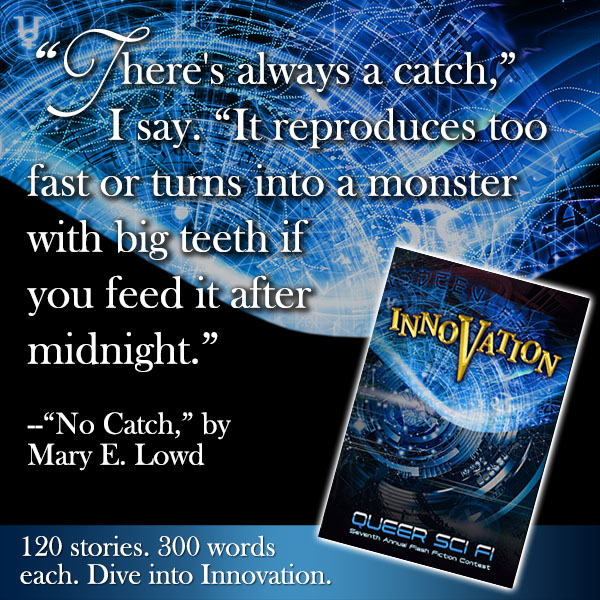 2) The introduction of something new.

3) The application of better solutions to meet unarticulated needs.

Three definitions to inspire writers around the world and an unlimited number of possible stories to tell. Here are 120 of our favorites.

Innovation features 300-word speculative flash fiction stories from across the rainbow spectrum, from the minds of the writers of Queer Sci Fi.

Is This Book Romance?: Yes

Is This Part of a Series?: Yes

Other Books in Series:

Even knowing what I was walking into when I began my “Innovation,” journey, I still was left many times screaming (both figuratively and literally), “Noooo, not yet!” and “You can’t end there!” and there were even a few, “What in the name of Jar-Jar was THAT? I gotta hear that again.”

My hat is off to ALL the authors for the ability to write a story under 300 words. I don’t know that I’ve ever even written a review under that. To me, that takes a skill I definitely lack. For any of you who stepped out for the first time to offer up a story, you too deserve applause. Some of my favorite authors are in this book, and they are the equivalent of Rock Stars to me. So, in my personal opinion, you are among some of the best SciFi/ Fantasy LGBTQ+ authors out there and that’s something to be proud of.

Now, out of the dozens and dozens of stories I was able to narrow it down to a Dozen of my faves. This was no easy task! *Gulps… Here we go!

-124 Therapy
Sean Ian O’Meidhir (296 Words)
Nothing says, “healing,” quite like sexual healing from an incubus and his partner.

(let me add if you haven’t read his and his partner’s books, YOU ARE MISSING OUT!)

-222 Basement Bargain
Jeff Jacobson (298 Words)
This was one that had me crying out for more. How much would you sacrifice for love? How much more important is your love than that of another? This one had me thinking all sorts of questions regarding selfish and selfless love.

-215 Cat’s Meow
Nicole Dennis (300 Words)
The first time I read this, yes first time, because there were many times I needed this, I cracked up! For anyone who has ever had or has a cat, you will get and love this! You will imagine your own fur-child and I guarantee if you don’t laugh, you will at the very least, smile with appreciation.

-099 Just Perfect
Redfern Jon Barrett (298 Words)
“Just Perfect” was a beautiful lesson in what happens when we covet. At least what can happen when we live in an American Horror Story, A Twilight Zone episode or a book of short stories put out by Other Worlds Ink. Bwahahahaaa….

-175 Divergence
Andi Deacon (300 Words)
This was another screamer for me. It was also another Twilight Zone episode that had a one-nighter with “Groundhog Day.”

-106 You Wish
James Alan Gardner (289 Words)
This was super cute and definitely one that left me crying out for more. I could see this turning into a beautiful love story fairytale.

-094 The Sceptre of Fire
Alex Stargazer (295 Words)
This author always surprises me, and because of that, I’m a fan. This Shortie is different than the others in its telling. It was more poetic and something I could imagine being told around a campfire in some fantasy realm by a Bard. I enjoyed it immensely and hope to see more of this from Stargazer in the future.

(This is another author I adore. Whether it’s a novella or novel, his worlds always excite me.)

-104 Pan-dora
Clare London (299 Words)
This little gem had me listening and re-listening over and over again. I kept thinking I was missing something or was trying to read something into the story that wasn’t there. Then, after my third time, it clicked, and I could have smacked myself. Sometimes, overthinking things in a story does the story a great injustice. Sometimes, what the author wants you to see is right there on the surface.

(Clare is another awesome author I adore. She never shies away from hard topics and themes and even when her writing shows the harder side of life, she balances it by showing how good it can be if we work to achieve it.)

-151 Mirror, Mirror
T.W. Cox (298 Words)
This cutie was a sweet, gentle reminder that it does not matter how others see us. The only thing that does matter is revealing our authentic selves (once we know who that is) and embracing and loving that self. Why? Because we are worthy. Simple as that.

-036 Graduation Day
Alex Silver (294 Words)
Oh, I adored this one and would love to see how this story pans out for Sibling Clo. I was rooting and cheering inside because of their strength and gumption. This one was definitely magical!

(I fell head over heels for Alex’s work a few months ago. His “Dan’s Hauntastic Haunts Series,” is sensational! No fluff, all creepy, scary, terrifying ghostly awesomeness with a gay and ftm MM side romance happening.)

-167 Speak
Brook K. Bell (291 Words)
Everyone needs validation. Even ghosts. Or so we learn in this little story. This one left me smiling, and gave me pause to wonder what life must have been like for our trans friends and family over the past decades and centuries. Many still must hideaway, while others live in the open and live in daily fear and humiliation. I loved this one. It both broke my heart and made it smile.

-197 E Pluribus Unum
Barbara Krasnoff (293 Words)
THIS ONE IS MY FAVORITE! As a student of psychology, this one appealed to all my “sides.” I could see scientists and physicists working together to find a way to make this idea plausible for society. It is definitely one that stays with you and leaves you thinking long after the story ends.

Innovation was outstanding from beginning to end! IF I were to critique anything it would be to maybe have a mark by the story or author’s name indicating that particular author had other works available. That way we could see what other worlds they have created for us.🌍

I received a complimentary copy of this book from Other Worlds Ink in exchange for my review.

Queer Sci Fi is giving away your choice of a $20 Amazon gift card OR a print copy of four of the other five flash fiction books in the series – Flight, Renewal, Impact, and Migration (US only unless you are willing to pay the shipping outside the US) with this tour. Enter via Rafflecopter:

“The fields are overgrown, have been for years with all the Bios underground. The wind kisses the grass in serpentine patterns long forgotten, patterns the Bios couldn’t imagine anymore. My mechanical hand stores the seed envelope in the mechanical pocket in my androgynous torso. In these suits, there is no gender. Gender is, always has been, in the mind. And I am finally, unequivocally, female.” —Seed, by Val Muller

“The girl kissed her, hard. Then backed away, grinning, teasing, drawing her to the end of the hallway and a flight of stairs leading downward. She took two steps and gazed back up at Lilian, one hand outstretched. Her brilliant red lipstick wasn’t even smudged. Her skin glowed in the harsh white torchlight.” —The Thing With the Bats, by Mary Francis

“Interspecies sex is outlawed on the Freespec Interplanetary Space Station. Politicians call it a safety measure. But I’ve been in the Medical Corps for half my lifecycle, and I call it criminally negligent prudery. Leaders would rather let innocents die needlessly—punctured by sperm darts and dissolved in sacks of voltaic pleasure mucus—than give them the knowledge to express their feelings safely.” — Are My Underwater Sperm Darts Normal?, Brenna Harvey

“The bell’s brassy gong echoes through the flat; the walls blush crimson. See, see! He’s at my door. The live feed shows him sniff his armpit; cup his breath. He wants to impress, but I’m impressed already. His lips softly part; he brushes them with stubby fingers, as he waits. Ugly fingers. Ugly hands. Scrawny neck. Milky eyes. But those lips, see, they’re perfect, just perfect. Plump n’ pale, a slither of my future.” —Just perfect, by Redfern Jon Barrett

“Lekke looked down over the valley, First People’s home for as long as any tales or dreams could tell. Now only Spirit Dreamer Manoot, neither he nor she but both, and Lekke, elder healer, were left. Lifetimes of Long-legs’ raids had driven First People to their deaths—or, some few, to the Way. If there truly was a Way.” —Going Back,” by Sacchi Green

“Savinna limped into her lover’s workshop, her hip still sore from tangling with the marabbecca which had knocked her into its well before she managed to kill it. Such was the life of a monster hunter. Not at all surprised to see Larissa hunched over her bench, hard at work tinkering with something, Savinna ghosted her hand over Larissa’s back.” —Those Who Hunt Monsters, by Jana Denardo

“The baby cried as Freya lowered the bartering bucket into the wishing well. Many had come to the tree-shrouded clearing to make exchanges—a bushel of azure apples for a sword, a woven blanket for a day of rain. The well had been the final creation of a thousand-year-old inventor. But dead wizards often don’t anticipate how their gifts birth consequences.” —The Bartering Bucket, by Diane Callahan

120 authors contributed stories for this volume: