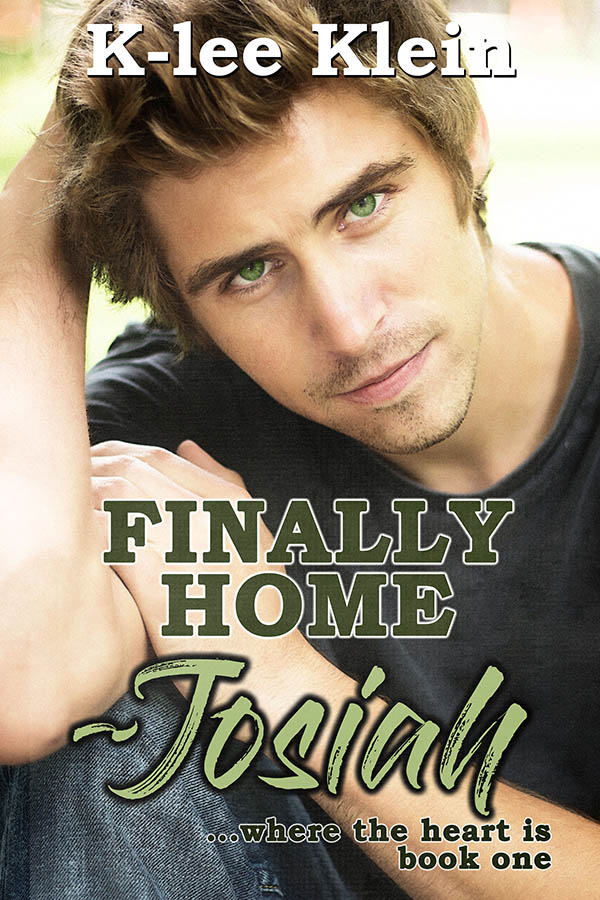 Josiah Nelson left the family home where his father’s bullying and his own fears made life a penance, swearing never to return. Now he has a funeral to arrange, another joyless Christmas holiday to survive, and a ranch to sell, before he can finally wipe the last dust of his childhood off his shoes and settle into his lonely big city life.

When he arrives in his hometown, Wyatt Ames is still there, still out and proud and everything Josiah secretly wanted when they were growing up. He can’t help feeling a tiny, fragile hope that this time, things might turn out differently. Especially when Wyatt seems set on teaching him that home isn’t the house you live in. It’s the place where your heart belongs.

K-Lee is giving away a $15 Amazon Gift Card with this tour. Enter via Rafflecopter:

It was like a bad dream come to life. Not the kind where a monster is hiding in the closet ready to eat your face, but more like an unending loop of being stuck somewhere you didn’t want to be.

Josiah Nelson hadn’t thought of the old ranch in that way for a long time. Yet there he was, tramping up the old weathered steps to the house he grew up in and regretting every minute of it.

The high-pitched squeal of the old weathered screen door shook the silence of the chilly night air. Josiah startled and a storm of memories rushed to the forefront of his mind, some good, but mostly bad. Stepping over the broken doorframe, he slipped inside the house of his dreams and nightmares. That particular board had been broken since he was a child and should have been fixed long ago. Josiah supposed there were things he’d have to take care of before listing the property.

The musty smell hit him first—earthy and damp like a moldy pair of wet socks. He wrinkled his nose when the underlying scent of pine cleaner assaulted his sinuses next. Someone had obviously tried to scrub away the history of the place, the bad memories holding anger and dysfunction. After Josiah’s mom died, his father’s domestic skills hadn’t changed, hadn’t improved. Anything not involving horses, trucks, or beer had been half-assed at best.

Gosh, had it really been ten years since his mama had been gone? He supposed his parents were together again—if you believed in that kind of thing—though his mom was more suited to Heaven while his dad should be further south. Cancer had taken them both; different types, different years, but the same body-ravaging killer.

His mama’s death had been the hardest time of his life. The sympathies he’d been offered when she passed still burned a hole in his heart: “She’s in a better place”, “at least she’s not suffering anymore”, “she wouldn’t want you to be sad.” The empty platitudes disturbed him, made him angry. Had they expected him not to mourn his mama? To let her go and wash his hands of all she’d meant to him? Josiah hadn’t been ready to let her go, but how much of a monster would he have been to want to prolong her last few months of suffering?
Losing her had made Josiah’s world so much smaller, unhappier and darker. Saying she’d been his rock, his best friend, was cliché, but true. He’d been left with a father who was no better a stranger, and well, that was a whole different can of worms.

Even the prospect of coming home brought back deep-buried regrets and guilt that rocked him to the core on bad days. Josiah imagined most people felt those things and learned to deal with them, but he wore his like a badge of disgrace or failure or both.

He closed his eyes, concentrating as he inhaled deeply, slowly let the breath out. Unwanted emotions threatened to send him huddling in the corner like the child he’d once been, but they had to be set aside, shoved back in that overflowing box at the back of his mind. If he was going to fall apart it couldn’t be in the first five minutes of stepping into the place. His mind and heart had to be clear and open, and he had to be able to deal with things before any feelings could be allowed to run loose. Sprawling into an emotional abyss of emptiness would have to wait.

Reminding himself that it was only for a few days had become his mantra since he hauled himself into his truck for his trip home. And he really hoped that’s all it would take to sort out whatever things he needed to do, then toss the rest into the lawyer’s hands. A few days and he could leave all this behind again, go back to the sad life he’d built for himself. Sad, but sealed away from the pain of the past.

But good intentions didn’t always pan out, and Josiah’s true feelings scurried to the surface as he trailed shaky fingers over his mom’s cherished antique buffet table. He became breathless, and hot tears stung his eyes when he caught sight of the white urn, pushed to the side of the credenza like an after-thought, rather than holding a place of honor where it belonged.

Before her death, Josiah’s mama had picked out her own urn. She’d liked the pretty dragonflies pressed into the base, and the simple shape and color. Josiah’s biggest regret was buried deep in the bottom of the empty vase. Mama had wanted to be cremated, had made it perfectly clear when she brought her purchase home. Josiah’s father had not been impressed and threw the thing against the wall in a drunken rage.

He missed her so much, not a day went by when he didn’t think about what he’d lost that sorrowful day. And even worse, he’d failed her last request.

Because the awful fact was that she was buried in a dark box in the wet ground, rather than being scattered around the pond and spending the rest of eternity in that stupid urn. Josiah’s father had made the final decision, and the stubborn old bastard had refused to accept the last wishes of his wife of twenty-eight years.
Instead, he’d put Josiah’s mama in the cheapest casket he could find, and buried her in the local cemetery—all because he didn’t believe in cremation. Josiah had been afforded no say in the matter and his father had thrown-out his wife’s last request like yesterday’s news. Knowing the man better than he’d ever wanted, his decision shouldn’t have been a shock to Josiah.

Fortunately, his mama’s best friend, Mrs. Aames, had known of her request and brought an identical urn over after the funeral.

“She wouldn’t have blamed you, Josiah. Your mama knew that your father wanted a casket, so she told me exactly what she wanted, and I picked it up before she passed. And if that man gives you any grief about it being here, you tell him to come see me.”

Now, ten years later, the rage remained, fueled by the things he’d never said to his dad. And Josiah would be damned if he’d fulfill any wish his old man might have—Christmas or not.


K-lee Klein grew up in the beautiful mountains of British Columbia and now lives only two hours away in Calgary, Alberta. Her life is blessed by three now-grown (but still spoiled) kids and a new, adorable grandson who calls her Gwaa Gwaa. She has a patient husband of over thirty years and spends her days being bossed around by a kitten named Poe, a senior feline called, Miss Chili, and a canine, Princess Chewie.

K-lee’s writing muse is terribly temperamental so to keep him close by and in-check, she had him inked on her left calf. Yet she still writes on his schedule and inspiration, and quite honestly, he can be a bit of a drama queen. K-lee writes mostly contemporary but has forayed into paranormal and urban fantasy, and her favorite tropes to write and read are hurt-comfort, friends to lovers, opposites attract, and relationships with children. Her biggest accomplishment as an author was overcoming all the hurdles to transition from publisher releases to her first self-published book.

Although K-lee considers herself to be an extroverted introvert and revels in her solitude, she very much enjoys traveling to conferences to meet up with friends old and new. She’s grateful for all the people in her life who accept her as she is and support her through the ups and downs as a mom, wife, friend, and joyfully obsessed writer.